We spent about a week in Kanchanaburi and as much man-made history as there is to experience, there is plenty of beautiful God’s Country too. So, between the times we spent exploring historical WWII sights, we did some more recreational exploring as well.

We traveled by train from the Thonburi station in Bangkok to the Kanchanaburi station. It’s an older, slower train that makes several stops along the way but there’s no better way to travel. The train even has vendors walking through the cars, selling fruit, Thai meals, beverages, and, of course, beer. It’s an eventful ride as the track goes through overgrown vegetation that hits the windows and explodes into tiny green leafy pieces. We thought it was a riot and had no problem simply brushing ourselves off. The ride took about 3 hours, after which we walked a fairly short distance to the riverside neighborhood.

The historical and backpacker section of Kanchanaburi lies just on the east side of the Kwai River. We visited a few temples (Wats) on the south side of town right near the river. They don’t compare in size to some of the Wats in Bangkok we have previously posted about, but their aesthetics are just as pleasing. Many of the intricate ceramic designs are made from recycled dish ware, which seems to be a common theme. We also came across some boyscouts and girlscouts doing some activities including a small zipline. The kids were all very friendly and outgoing – Thailand earned the name “Land of Smiles.”

Another day, we decided to join up with an affordable group tour. Every traveler wants to take the “road less traveled” and we are no exception, but, upon weighing out the costs, we decided that it was a worthwhile endevour. We climbed aboard a Toyota van with several new European friends and set off for a big days’ adventure. Our first stop was the Soi Yak falls, a very pretty waterfall close to the original Death Railway. Along with the waterfall, there are some other Death Railway exhibits and caves to explore. From there, we traveled to Hellfire pass where we walked a small part of the trail and checked out their excellent museum. After an excellent lunch, we continued on to do something very new to both of us: Elephants.

Erin and I, along with 4 Polish kids, hopped in the back of a truck and took a bumpy 15 minute ride to a compound. The compound is the home to several large elephants whom invited us to take them for a spin. On our way to climbing up to the elephant “dock,” we were tickled to see an elephant hounding its trainer for a drink of his Coca-Cola. The trainer poured some into its snout and, after a few seconds, the elephant sprayed it into his mouth. Noticing that the bottle still had some soda, our new large friend politely asked for the remainder, drawing a chuckle and compliance from his trainer. We decided this would be the best one to ride – the one all hopped up on caffeine! The elephants wear a saddle with a small, 2-person wooden platform attached that we sat on. The trainer (all rather small Thai man) sat on its head to “steer” the animal with a series of grunts. I’m not sure how one learns to drive an elephant but it seems to require deep vocal chords.

(Polish friends with their guide riding on the elephant’s head)

After about 15 feet of bumpy ride, the elephant was ready for a snack to top off his soda. He reached his trunk out to grab some vegetation and no deep grunt in the world was going to stop him. After chomping some leaves for a minute or two, he finally gave in and continued the short journey up and over a hill towards a stream. I don’t really have words to describe what its like, aside from bumpy, slow, and exilherating. With each step, the four quadrants of the elephant seem to move in different directions, forcing the riders to hang on. This is especially true going downhill. Once we reached the stream, the elephant got excited for a drink of water (soda does leave one feeling a bit dehydrated) and he sped up a bit, putting our platform at roughly a 45 degree angle. We did the best we could to hang on, let alone take any steady pictures! 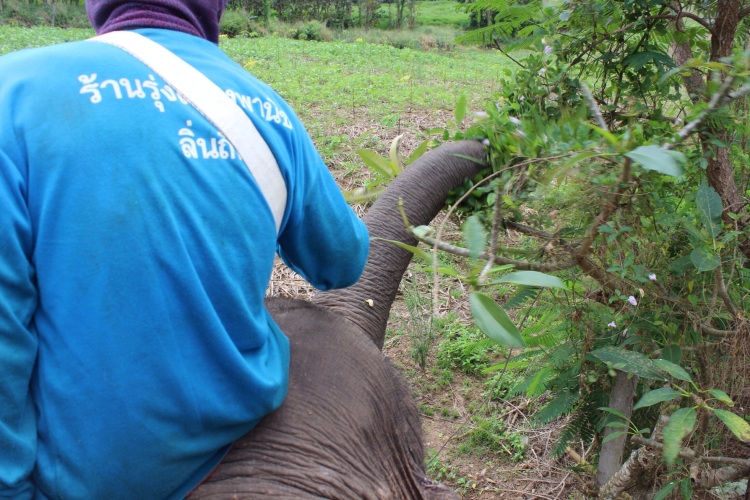 Upon reaching the stream, (this section is not intended for an immature audience – or a mature audience for that matter) we saw the elephant in front of us seem to brace himself. The next thing we know this elephant relieves himself with the force of a fire hose. I mean you could hear this tinkle from Laos. We were speechless and in total awe, until plop plop, he relieved himself in a #2 fashion. Size of a basketball, I swear. He left his member out for a nice walk in the stream, like he was using it to troll. I can only imagine how refreshing it must have felt. Once everyone was feeling springy again, we continued our journey for another few minutes until we came upon the second elephant dock. We disembarked and the trainers took our elephant and the trailing elephant off to the jungle, while the lead (and recently relieved) elephant stayed back to preform a bit. He walked over to a banana tree and laid down while our Polish friends fed it bananas for its troubles. It really was amazing to see such an incredible and large animal acting just like our family dog. After a bushel of bananas and a nice photo-op, he was off to join his friends in the jungle. Hope he doesn’t forget us.

From there, we climbed onto 2-person rafts made of long bamboo shoots and slowly floated our way back down the river to camp. This seemed a tad disconcerting to us considering what we had just witnessed in the same stream, but I think it qualifies as “off the beaten path.” We swapped emails with our Polish friends in hopes that somebody got a decent photo, and soon joined up with the rest of our tour. The others had chosen to spend time relaxing at a hot springs while we were riding elephants – I mean really? Well, to each their own. We headed back to Kanchanaburi, spent a little more time at the River Kwai Bridge, and then back to our hostel, tired yet ecstatic from a busy day. 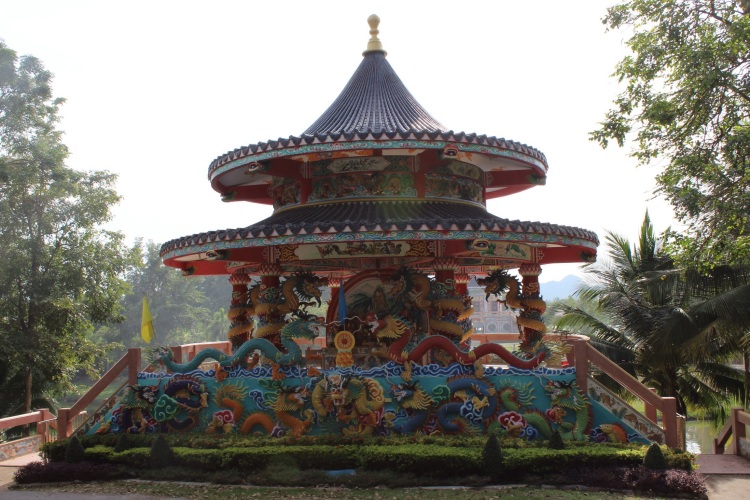 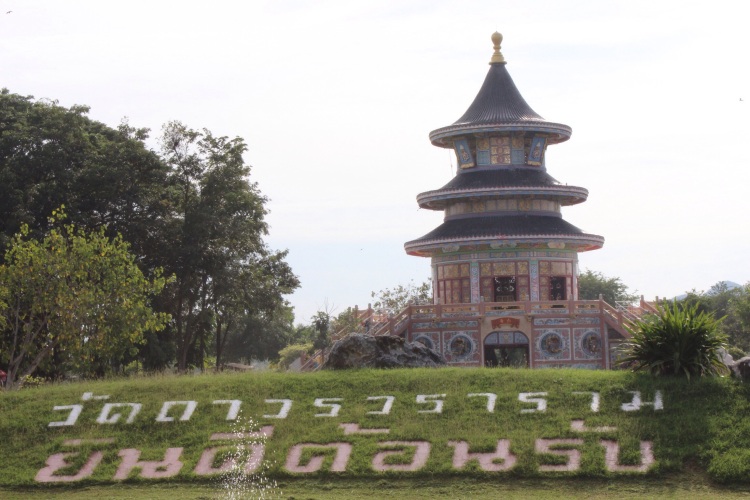 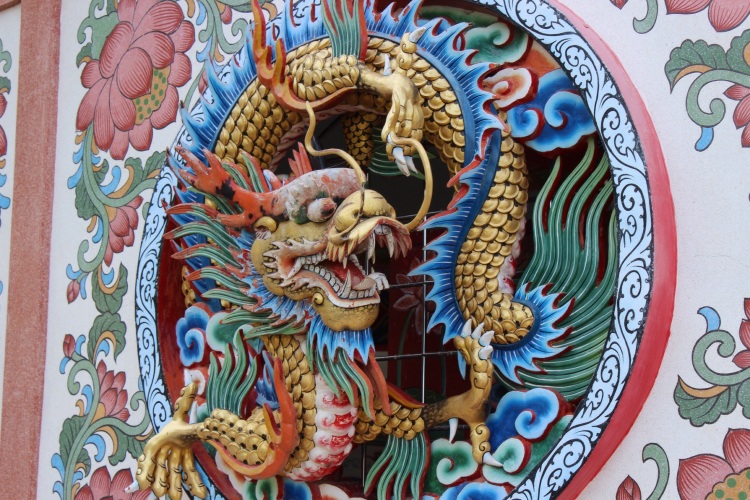 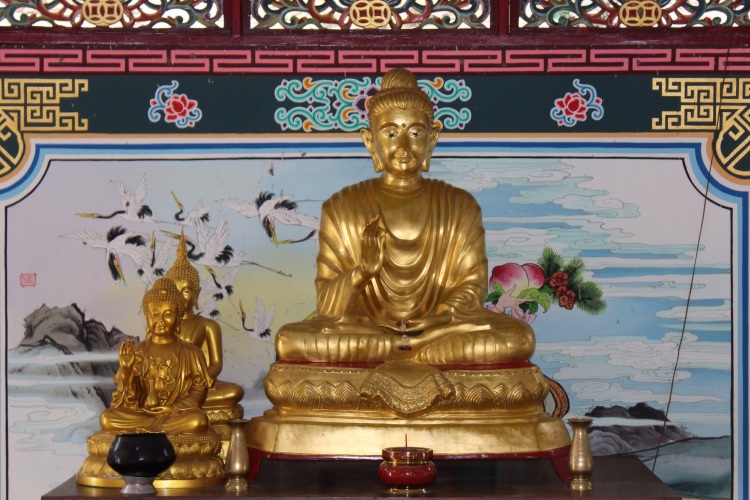 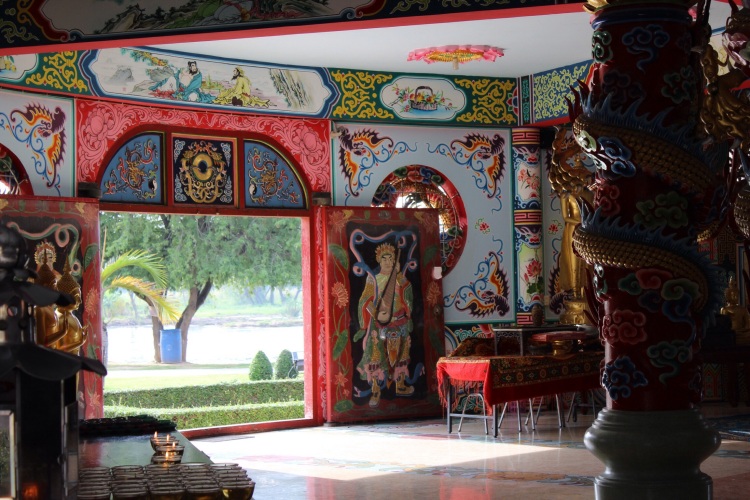 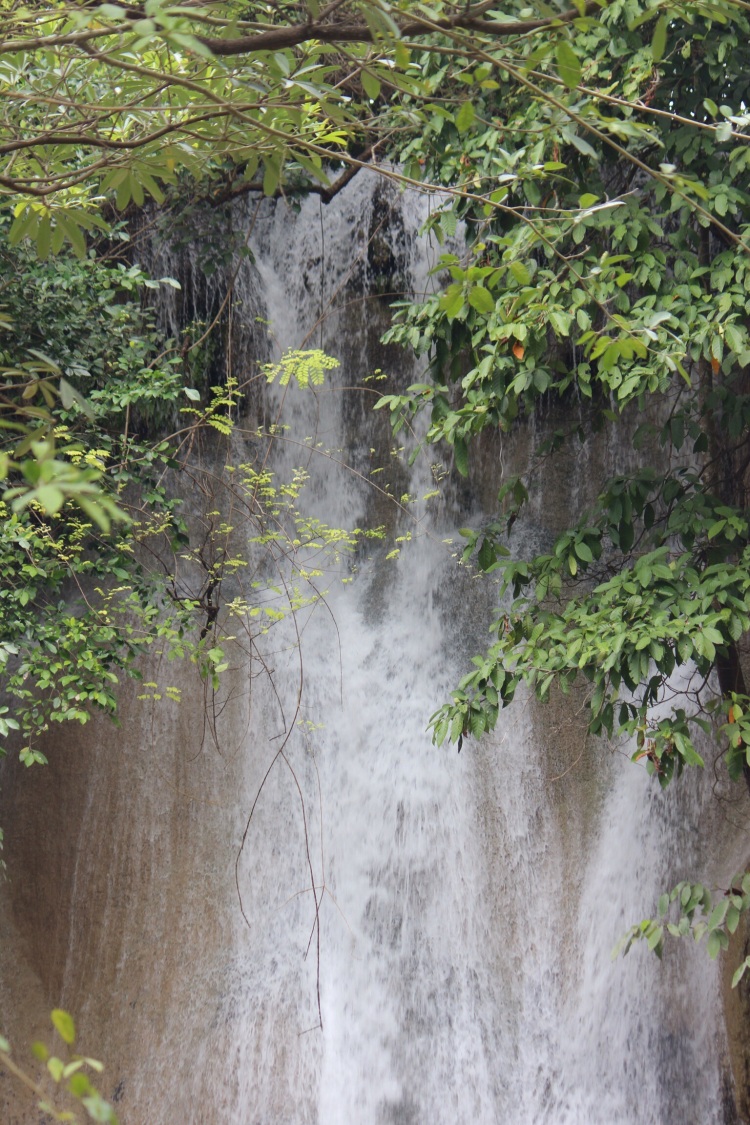 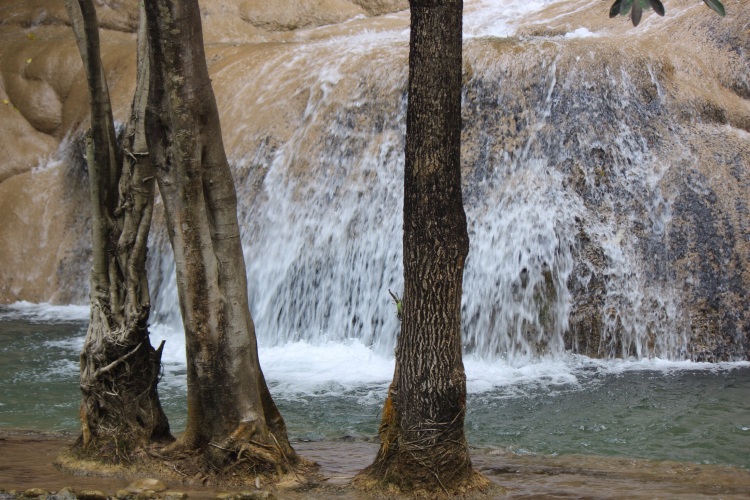 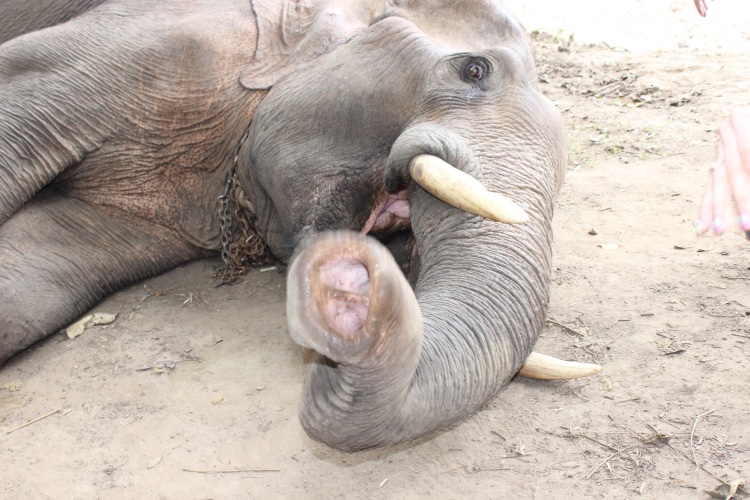 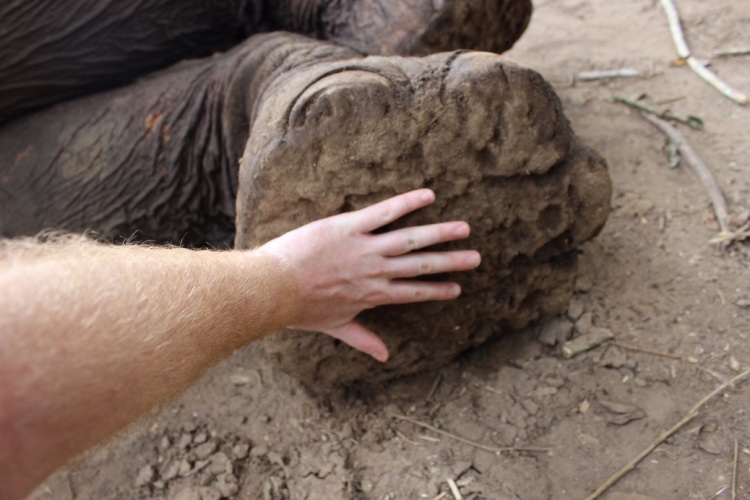 2 thoughts on “The lighter side of Kanchanaburi”